Who Builds Walls and Who Pays for Them? 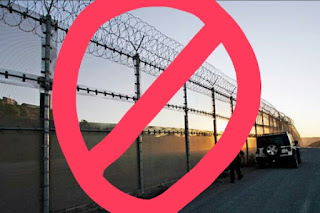 The Great Wall of China was not built for its would-be historic value nor for the tourist attraction it earned now. Neither do other walls of the world such as the really ancient Sumerian's Amorite wall, the Walls of Constantinople, the Berlin Wall and many others including our own Harar City Wall.

Who Builds Walls and Why?

In contrary to the saying 'good fences make good neighbours', walls are evidences of distrust and hate. Sumerian's Amorite Wall was built 4,100 years ago by Sumerian rulers to keep Amorites out of Mesopotamia. Walls of Constantinople (today's Istanbul) were built in the 15th century by Byzantine empire to keep away Arab conquerors. Great Wall of China was built from the 3rd century BC to 17th century AD by the orders of kings to defend Ming dynasty and to keep northern nomadic tribes of Mongule out. Berlin wall was built in the 19th century to stop people escaping communist East Germany to the west. The difference here, it is not West Germany that blocked entry but the East prohibited exit. Harar wall of Ethiopia was built in the sixteenth century by successor of Ahmed Ibn Ibrahim, Emir Nur Ibn Mujahid to protect the Sultanate from outside invaders.


Building walls have continued to this day. Government of formerly globally dispersed society - Israeli, a country a little bigger than one third of Afar region in Ethiopia geographically, has built three walls to keep Palestinians out from the land it occupied some fifty years ago.

In medieval times and before, mobility of humans mostly restricted by natural obstacles. When civilization started succeeding to alleviate those natural barriers, humans themselves started to make artificial barriers. Walls, good examples next to imaginary borders to these artificial barriers, are built against natural rights of human mobility. World civilization was meant to head to broaden freedoms of people. In stead, it seems to be narrowing it.

The world pretends to proposing walls as a solution to make peace between rival neighbors. And, to prevent migration of people from war torn or poverty wrecking countries to the stable and rich states. Questions like 'Is this really making peace or stopping migration? Is keeping economic migrants out of rich countries morally right for the latter was built by the labours and resources from poor countries?' remain to be unanswered.

Kings who are envious of their kingdoms used to build walls and restrict movement of global citizens to protect their empires from rivals. Today, 'democratically elected' presidents are making sure that tradition of the kings continue. People, especially in global terms, have profited little from it.

Donald J. Trump promised to build a wall in the border of US and Mexico 'to prohibit illegal migration into the US'. His promises are not, however, his genuine wishes. He is not a king and he has no personal kingdom he should protect for his empire's survival. Besides, survival is not an issue for the leader of globalization, US. In fact, he is meant to 'Make America Great Again'. But, that is a mere rhetoric. America has never been greater than today. He has only wanted the presidency status by cheating the mass telling what they want to hear. All what he really wanted is to be on top of power and news. The wall, however, will not have its cost covered by Mexican government as he said "will let Mexico pay". Sadly though, Mexicans and also Americans themselves pay in other terms as other historical walls of the world have let people pay for the walls.

One fact is forgotten: civilization of the world has been brought through peoples' mobility. Today's world civilization is the result of many historic civilizations. It's not continental, nor can be kept in a musium of nations demarcated by borders. It's human civilization. It is meant to move with people.

Humans were created free. Governments ristricted their freedom so as to give them [the people] order in exchange. Order and freedom and liberty should go together. Otherwise, nations become worse a prison than they really are.

Walls Make Calls to Their Own Demise

There are no walls that permanently served their primary goal. The Great Wall of China, for example, "was once the largest manmade object in the world, but despite its grandeur, it often proved ineffective as a defensive barrier. The Mongol leader Altan Khan famously bypassed the wall and raided Beijing in 1550, and the Manchus later broke through in 1644 and brought about the fall of the Ming Dynasty." Shulgi and Shu-Sin constructed Sumerian Amorite's wall. "This very first extensive rampart only succeeded in fending off the Sumerians' enemies for a few years. Sin's successor  found itself under attack from both the Amorites and the neighboring Elamites. After the destruction of the city around 2000 B.C., Sumerian culture began to vanish from history." Walls couldn't survive Sumerian civilization. The same is true for other walls. Walls of Constantinople attacked by "Turks who then captured Constantinople, effectively toppling the Byzantine Empire". The Berlin Wall which, separated families and caused deaths of whom tried to breakthrough the wall, was demolished after 28 years. East Germany Communism is demolished with it. Islamic sultanate that surrounded itself with Harar walls is replaced by Christian kingdom.

The bible has a story of a wall that had fallend down after people shouted at it, Jericho wall. (Joshua 6) 'Guided by priests Trumpets, guards, and people's shout to the demise of the gates of Jericho wall.' However, then, these people were 'ordered by their god' to destroy whatever they find in the city of Jericho (as is the case in history of real world) in an evil way, I only want to stress its symbolism in what people can do to walls. They can and will cry over walls built and to be built, and they will succeed.

The best way to keep civilization is not building walls. It is to make bridges so as to expand it and others endorse it.

The Meaning and Fate of "Trump's Wall"

If US Americans allow the building of a wall between borders of US and Mexico, it becomes clearer that they have named Mexicans enemy. So will Mexicans name US Americans enemy in reaction. The wall, like many other walls of the world, will let the people of Mexico and even US Americans pay a lot of sacrifice in a lot of terms. However, people would always find ways to break through as they were created to mobilize. And, eventually, the Trump wall can't be spared from falling down like Jericho wall.
Posted by BefeQadu Z Hailu at 11:06 PM