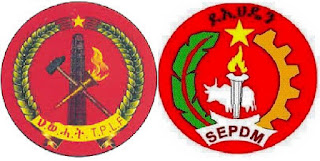 EPRDF is convinced that it has controlled the mood of public protests that had been escalating when State of Emergency (SoE) was declared. (Now, the directives are lifted up.) This is true especially for areas surrounding the Capital, Addis Ababa. People whom I talk to tend to forget the high tension back in September 2016.  After Christmas in 2016, new series of concerts recompensated their bankrupcy of cancelled concerts on the eve of Ethiopian new year; public festivals (such as Timkat) went on as quitely as in the old good days. Political oppositions are as divided as before; and, the superficial alliance against TPLF, that was observed among the divided dissenting elites during the heyday of protests, has crumbled at the wake of declaration of SoE decree.

OPDO has conducted cabinet reshuffle within party and within Oromia regional State following Oromo protests. ANDM, on the other hand, didn't undergo any important reshuffle yet in both within party as well as regional state's positions. It even preserved its position of deputy premiership. TPLF cadres, unlike before, are blaming and criticizing the two parties for aggravating public grievances and protests in their respective regions. They are angry especially with ANDM which sounded to be no more under control of TPLF. There are implications to assume there are changes in loyality to alliance.
TPLF used to rely on its "divide and rule" principle regarding Oromo and Amhara politicians. But, protests are found to break that principle. In addition, OPDO and ANDM members are not necessarily against Oromo and Amhara protests, respectively. Therefore, the new loyal ally for TPLF becomes to be ESPDP, Ethiopian Somali People Democratic Party, a ruling party of Somali region and partner to EPRDF.

Tigray (base for TPLF) and Somali (base for ESPDP) regions have a lot of things in common. The number of their population is close to each other. Both have neighboring foreign countries that speak their language and they were divided by colonialism (Eritrea and Somalia, respectively). Both have politically motivated 'border conflicts' with neighboring regional states in Ethiopia; Wolkite area of Tigray-Amhara and South-East border of Oromia-Somali… TPLF wants to manipulate these resemblance into an alliance to stand against OPDO (basing Oromia) and ANDM (basing Amhara) both "representing" regions that are highly populated.

ESPDP showed its support to TPLF since the beginning of Amhara protests. Somali state was reported to donate ETB 10m to support "displaced Tigrians from Metema of Amhara region during Amhara protests"; Tigray state repaid the favor by donating some more amount to help rehabilitate recent drought victims in the Somali region. ESPDP supporters have even organized public demonstration against Oromo protests in Minnesota. Oppositions believe the recent 'border conflict' in Oromia-Somali region is waged by TPLF behind the curtain to give the alliance popular support.

OPDO officials complained about the "attack of Somali militia crossing Oromia border". The conflict is reported to have displaced 35,000 residents of the border.
TPLF affiliated websites and individual cadres (on social media) are publishing stories that blame OPDO for the Oromia-Somali border conflict. OPDO officials are also responding to them in every available means, interviews, blogs and social media posts as well. This, publicly criticizing TPLFites by another member of the coalition, was not a common thing before. Similarly, TPLF cadres campaigned too much for TPLF to throw away ANDM out of the EPRDF coalition because they are afraid it will overtake TPLF dominance. ANDM officials ignored them and continued untouched.

The Coalition of EPRDF, even though it is still dominated by TPLF, is shaken by OPDO and ANDM. Even though TPLF still controlled its dominance over the Federal government through lower hierarchies, the current trend is an implication that the dominance of TPLF will not go any further.
It is obvious that TPLF manipulates minority groups to get its dominance. During nomination for a candidate of chairman to EPRDF in 2015 party congress, TPLF had nominated no one. It just gave its vote to the SEPDM (basing SNNP) candidate, Hailemariam Dessalegn. Each party in the coalition has equal say to the other even though the number of population they say to represent differ. Therefore, TPLF  simply promoted Hailemariam by adding its votes to SEPDM congress members' votes. In this process, the most obidient ally use to hold power and serve TPLF dominance.

Now, with the growing disobedience and independence that OPDO and ANDM are showing, TPLF desperately needs SEPDP's alliance. It looks like it has already started working toward that.

Recently, we have learned that EPRDF has postponed the coalition's regular congress that should be held this year. The spoken reason behind the postponement is "the deep reform" (ጥልቅ ተሐድሶ) that the coalition promised after public protests of 2016. It should be completed first. The term 'deep' (ጥልቅ) added to the term 'reform' (ተሐድሶ) used after TPLF split in 2001.

It is no wonder EPRDF is shaken after the protests. But, change of dominant power in the coalition maybe a wonderful thing to the oppositions. The internal power struggle gives another chance for oppositions to win if they try harder.
Posted by BefeQadu Z Hailu at 2:31 AM