Will #OromoProtests ever Spread to #EthiopiaProtests?

Email ThisBlogThis!Share to TwitterShare to FacebookShare to Pinterest
More than 100 towns (with population more than 5,000) in Oromia have witnessed protests; more than 140 people were killed; and, more than 5000 people were arrested following the ongoing Oromo protests. Yet, it seems the protests are limited in Oromia region and didn't show any sign of spreading to other regions.
It is a serious issue but no political analyst seemed to be seriously concerned about it. Will the protest grow to be Ethiopia-wide? Is there even a need for it to be? If so, how? I will try to raise similar questions with my own answers. My hope is you will proceed in elaborating it.

Will Oromo Protests Continue?
Oromo protests are not only about the Addis Ababa expansion plan. As many Oromo civil rights activists are explaining, the protests are about anonymous self-administartion of Oromia, proprotional representation of its people in Federal administration, upraisal of Afaan Oromo to Federal working language status and etcetra. Therefore, lone-cancellation of the master plan would not stop the protests.

Harrassment, intimidation, mass arrest and killing are traditional instruments of Ethiopian government to stop social movements. In Oromo protests, however, this system had been applied against protesters in 2014 but failed to prevent explosion of the protests again for the second time in far more strength. This is an implication for that it continues even further regardless of government actions to silence them. Thus, we can conclude that the protests will continue but (in my opinion) their success will be dependent of two reasons: (1) they have to stick with non-violence startegies; i.e. they have to avoid any chance of turning the protests to violence; (2) the protests have to be coordinated not only intraregionally (within regional subdivison) but also interregionally (with other regions small, on and off protests).


Should Oromo Protests Continue?
There is no consensus among scholars as to what kind of social movement will result in grievances resolved. However, most scholars agree, the more popular a social movement gets, chances are more for it to succeed. It is in this understanding that many are seeking the protests in Oromia to dispread to the rest of regions in Ethiopia.

In addition, land grab - the primary cause of the current protests - is even worse in some regions such as Gambella. Liberal opposition groups have been blaming the constitution, which disgranted ownership rights of land from individuals, for not giving land owners the bargaining power over the land they till. Therefore, these groups, at least until Article 40 of the constitution gets amended to this regard, oppose the expansion of Addis to Oromia region. Moreover, there are other groups who are in continuous disagreement with the authoritarian regime of Ethiopia. Ethiopian muslims, who for the past four years non-violently resisted reported regime interference in religious affairs, are one example. TPLFites supremacy has been a disappointment of everyone for the past two decades. Everybody agrees democratization has declined backwards. Civil societies, free press, and the right to freely associate and demonstrate are weakened. Only a contested economic growth spared EPRDF led government from a total dark image.

All the above reasons make up the need for a coordinated, continued, Ethiopia-wide protests to be held for either the government will open doors for improvement or it will be changed by the will of the supreme people.

Do Ethiopians Protest?
Two scholars (whose name I forgot to mention) have two contrasting models of protest. (see pic.) The first model argues that social movements are high in either closed or open systems; the assumption is that when a system is closed people need a scape, so they protest. When it is open, people see hope to get what they want through protests. Either way they protest. The other model (numbered two in the pic.), argues that people protest when a system is not open nor closed but lies in the middle. The assumption for this is that if a system is open, then there is no need to protest and if the system is closed, there is no way to. Empirical researches are said to support model two. It is in authoritarian regimes that people usually protest where the n-curve reaches its maximum peak. 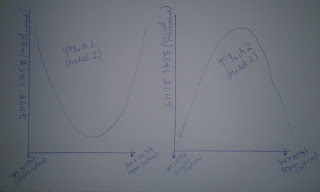 Ethiopian government fits authoritarian regimes definition. It is founded in democratic principles according to the written constitution and have the structure to allow that. Practically, it is totalitarian system with extremely limited legitemacy and accountability. Therefore, it is a matter of time that all the rest Ethiopians, along with their Oromo brothers join in the protest.

There are, however, conditions to head to Ethiopia Protests starting from Oromo Protests:
1). Getting settled with Hagos vs. Tolla issue: while symbolizing inequality in simple terms, it is also important to recognize all individuals in an ethnic group can not be categorized in the same basket with elites who exploit the ethnic group for their own interest;

2) Establishing an anonymous and diversified activists' group that leads protests: DimtsachenYisema (the online group that leads Ethiopian Muslims protests) is a good example. This assumed group, its leaders preferably living abroad, plans peaceful strategies, creates public awareness, coordinates nation-wide movements and keeps the pace of the protest according to sought possibilities.
Posted by BefeQadu Z Hailu at 6:43 AM