#Ethiopia has a prison-in-a-prison for its journalists

Ethiopian government is the only government of our planet that has prosecuted 12 journalists in relation to ‘terrorism’ and yet says ‘there is no journalist jailed for what it has written’. A teacher and Journalist Reeyot Alemu, is one of these convicted journalists in “supporting terrorism”. She was accused for taking pictures of graffiti (the word ‘beqa’ (enough) written in a street wall - that is said by the government ‘were written to incite terrorism’) and sending them to Ethiopian Review, a website where she worked as a reporter and owned by an Ethiopian diaspora, Elias Kifle (who himself is convicted in absentia). 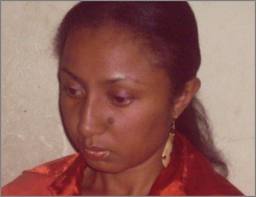 I had gone to Kality to visit Reeyot Alemu on August 26, 2013 and I joined her sister, Eskedar Alemu, right at the door of Kality prison. One of the door guards told us that only relatives are allowed to visit Reeyot. We argued a little and she let us pass. We have explained the incident to Reeyot. She then told us that she was also under pressure from the prison officials enforcing her to list names of her visitors. Her eyes were shading tears when she said:


“No, I can’t. I can’t because my visitors are not only family and relatives. I have many friends who visit me every time and it is my constitutional right to be visited by every one of them. I told them I won’t be visited by anyone if everyone is not allowed to…”

15 days later, on the eve of Ethiopian New year – Sep. 10, 2013, the news that Reeyot Alemu went on hunger strike came out. Her strike was a reaction to the restrictions of visitors. “She was told that either of her father, mother or her ‘God father’ would be the only people who are allowed to visit her”, says Eskedar; even her fiancé, Sileshi Hagos, and other family members are not allowed to.

The same had happened to journalist Eskinder Nega. For more than two years, he was given only a ‘piece’ of his right to be visited by his wife and child but no one else. Now, he once again is granted back his rights of being visited by anyone since a few months ago. However, there is no reason uncovered about either the prior restriction or recent permission of visitors to him.


It is unfortunate that, unlawfully, the prison administration apply hardly the same treatment between prisoners who are convicted ‘in relation to’ the controversial ‘terrorism act’ and to that of other convicted criminals.

The time in which family and friends can visit Reeyot and a few other ladies in her cell has been different and limited as compared to others. According to the custom, one can visit Reeyot on weekends for only half an hour (from 12:00 AM to 12:30 PM) and for 10 minutes on weekdays from (12:30PM – 12:40PM); whereas, one can visit other ‘ordinary’ prisoners, who have been convicted of any crime including murders, for 3 hours in the morning and other 3 hours in the afternoon all week long.

The other difference between Reeyot et al and other prisoners who are convicted of other crimes is the way visitors communicate with them. While Reeyot hosts visitors, the guards stand by her to listen to the conversation. If, for example, she and her visitor prefer to communicate in English, then the guard will interfere and tell them to speak in Amharic. There is even an experience, which is reported by Dawit Solomon, a close watch of her case in prison, when the warders banned her boyfriend’s postcard on which he wrote ‘I love you’ and which in contrary they thought he is smuggling some other message in.

TPLF member, Colonel Haimanot (wife to one of big corruption suspect Gebrewahid and detained while trying to hide documents) is recently moved into Reeyot’s cell. According to information from Kality prisoners, Col Haimanot has a relative amongst the prison guards. In transitivity, Haimanot’s relatives are also relatives to that guard and receive special treatment when arrive there to visit her. Her visitors will be allowed to get into the cells, take time to have coffee in its traditional ceremony without having time limit doing so.

The same had been true for former officials and then prisoners – Tamrat Layne and Siye Abraha. A prisoner who shared cells with them told me once that these two people were allowed to go out of the prison with the protection of warders to take shower, have dinner and sometimes to meet people during nights.

If the objective of imprisonment is to correct the convicted ones, then to encourage reading and education should be one of the tools to meet the objective. In Kality prison both are allowed but not easily to these journalists and others who are convicted in relation to ‘terrorism’.

These prisoners are not allowed to get books. Eskinder says, “Especially those kinds of books that have titles combining words of ‘Ethiopia’ and ‘history’ are not allowed in.” The same is true to the ward of Reeyot Alemu and others such as Wubshet Taye, Bekele Gerba, etc.

Local independent newspapers and magazines are not also allowed in; Eskinder further explained it to me that even News TV channels like BBC and Aljazeera are not allowed to be viewed in zones where he and others are imprisoned.

Reeyot Alemu, after a tough struggle with the prison admins and after the media revealed the story, is now allowed to get distance education. But, it is still difficult for her to get supplementary books other than the books directly sent to her from the College.

Reeyot has health problem for which she is barely receiving proper treatment; she is suffering from breast tumor. She is not getting a follow up from the same health officer who knows her medical history. Rather, she visits new doctors every time she goes to hospital and she is not usually informed about the day of her next appointment. Activist Kirubel Teshome has once explained it as:

She went to medical checkup on March 19 where her new doctor, who has no follow up of her case and hardly knows her medical history, ordered for another appointment after three months.

However hard she insisted to know the exact appointment date, she is totally made out of the loop and it is still held a secret by the prison guards and management. The guard who escorted her to hospital told her that she received the appointment date but she is not ordered to tell her when.

Reeyot told us that she formally complained to Prison administrator about the lack of proper medical attention she should be having and impartial treatment of the rights to her education she is not yet allowed to enroll.

The prison administrators heard her appeals and grievances but instead of relieving her from the additional burden of injustice they formally charged her with an alleged accusation of not respecting and abiding prison rules and guards. Such charges utmost are punishable to solitary confinement with no permission to visitors, even close relatives.

The Warders don’t care about Hunger Strike:
They learned it from Top Government Officials

Reeyot Alemu went on a hunger strike starting from September 10, 2013 for more than 100 hours. A couple of other prisoners (Emawayish and Fetiya) joined her all along. However, during the times she went on hunger strike, the prison administration do not like to show any sympathy or tried to answer any of her questions. Nevertheless, they detained her boy friend who went into Kality to try his chances of visiting her for three and half hours, hit him on the head and released him on dusk. Knowing that she is on her 4th day of hunger strike, the prison admins told her family on Friday that they will not discuss the issue before the following Tuesday.

Reeyot quit the hunger strike and start eating on Sep. 15, 2013 after the pressure of family and friends in the prison. No government official has commented about the entire crisis.

“Reeyot is the symbol of injustice in the prisons”

A friend who has heard the news called and shared me her frustrations: ‘Reeyot is one of best known among jailed journalist. She is a recipient of IWMF award for Courage in Journalism, UNESCO 2013 World Press Freedom Prize and HRW’s Press Freedom Award and other well known international awards since her imprisonment two years ago. She, at least, has a few - though not enough - voices to tell the injustice against her. But, in the same prison, there are many prisoners who are unfairly convicted due to their political opinions on either ethnic and/or religious issues and are passing through inhuman treatment’. There are many other voices we are not hearing. Reeyot’s voice is a symbol to all the other voices.

In July 2013, a delegation of EU Human Rights’ sub-committee, led by Barbara Lochbihler, was denied access to the prisons. Officials denied the EU delegation to access the prisons only because they would rather risk the economic support than uncovering the inhuman treatment in the prisons.

I, myself, was detained for over a night for taking only three pictures when police crackdown anti-Graziani memorial demonstration in May. The jail that I and others spend the night was small, filthy and full of detainees more than its capacity. Some of the detainees have stayed there for months without being charged that they were jealous to learn we were leaving the next morning.

In Kality, the cells might not be either as congested or as filthy as other area jails. Nevertheless, as long as the prison administrations are not governed by law, their ill treatment to the prisoners makes the worst of Kality.
Posted by BefeQadu Z Hailu at 2:01 AM